The breath and spirit of the desert

Sanita Lisica, a diplomat at the Embassy of Bosnia and Herzegovina in Qatar, bachelor of oriental studies by profession, Turkologist and Arabist and MA in Arabic language. Ex reporter at BHTV in Sarajevo. Inspired by the desert and orient, she draws desert motives on canvases with sand. She exhibited her works in BiH, United Arab Emirates, Qatar, many independent exhibits Breath of the desert, Whisper of the sand in the veil of secret, The scent of Levant…

Sand as a tool for painting. Where did the love for the sand painting technique come from?

My love for sand painting was born during the Oriental studies in Sarajevo. Namely, old Arabic poetry or Muallaqe (the most beautiful seven songs chosen at competitions in pre-Islamic Arabia, embroidered with golden harfs and placed on the walls of Kaaba) woke up the love for the desert in me. Pre-Islamic poets Imru’ al-Qais, Antarah ibn Shaddad, Tarafa and others used exceptional language style to describe the desert, all its beauties, but also the roughness of life in that environment; they described everything that surrounded them and suppressed them, everything they loved, but also the ones who loved them – battles, camels, horses, habitats, camps, etc. All that somehow instilled in me, so I fell in love with the desert and sand and wind which plays with sand grains and carries them from one sand dune to another, and all that through the beauties of Arabic language in which the desert and everything in it was described. I fell in love with the desert before I saw it.

After my first visits to Arab countries as a student, and later as a reporter (Egypt, Libya, Palestine), I started collecting sand and painting what remained in my memory when I came home (a morning in Tripoli, ruins in Gaza, cemetery in Jenin, Palestine, a lemon tree in the backyard of a demolished home in Rafah, a nomadic habitat in the middle of sand vastness, the thirst of the desert for water). 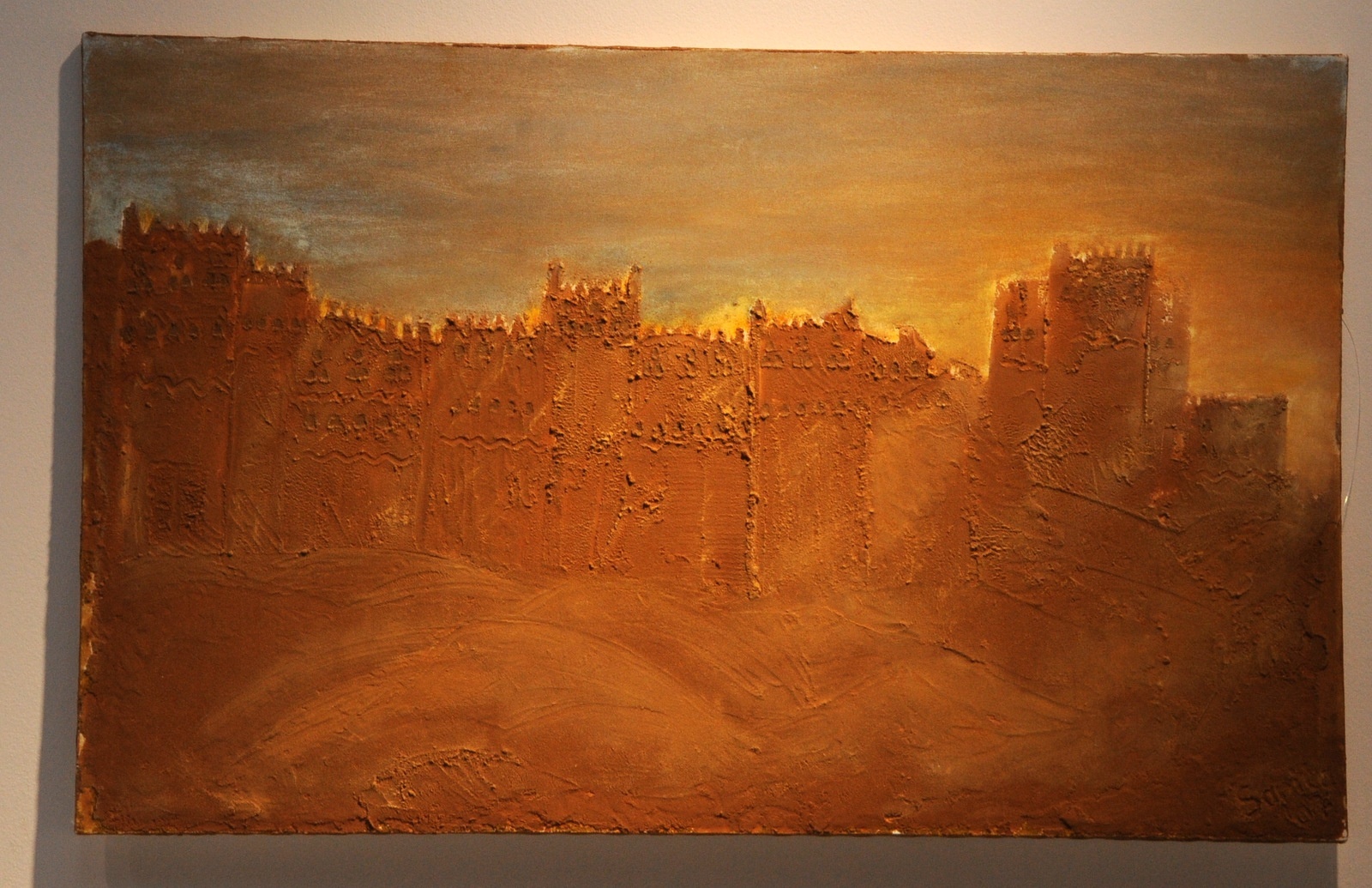 Are you afraid of the white canvas/paper and when do you know that the last GRAIN of sand is the one with which you are finishing your painting?


I am not afraid. On the contrary. Actually, every painting is an adventure for me. There are always new ideas born while I work on one painting. I have painted with sand for almost 15 years and I invested a lot of effort to find an appropriate technique with which I will keep the sand on the canvas and keep its original color. It is a very demanding technique. Sometimes I work on a painting for several months because of the layers I want to accomplish and keep on the painting. Actually, Mohamed Orabi, an Egyptian artist and professor at the Academy of Luxor, saw my paintings for the first time during his visit to Sarajevo, and he encouraged me to exhibit my works and to continue working because of my unique style and technique. How do I know when is the last grain of sand with which I finish the painting? Well, the artist simply feels it.

What is your main inspiration which drives you to paint with sand? 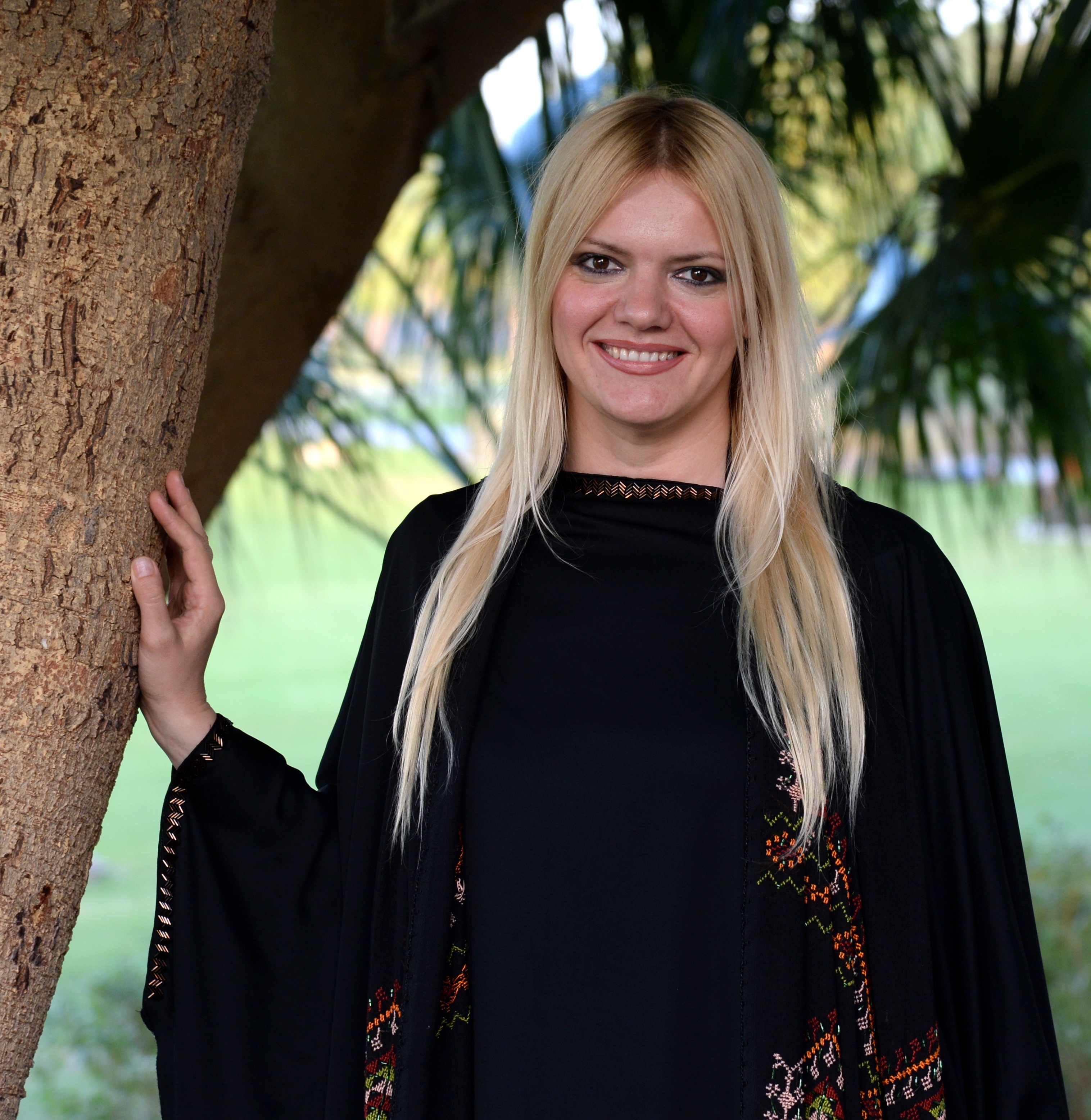 As I was saying, the old Arab poetry inspired me at first, and now every painting is a story told by the sand and its origins. The painting The City of Secrets, painted with sand from Yemen, tells the story about queen Belkis who ruled Yemen a long time ago, the painting Al Dir’iyya tells the origins story of the Kingdom of Saudi Arabia, the painting The Whiff of History speaks about an old town at the north of Qatar covered by the sands of time which had very active trading and marine significance, the painting Fight tells a story about the life of Palestinians and their constant struggle for survival and there is a rock from a demolished house in Gaza in the middle of the painting. I feel peace when I look at my paintings and that is the reason why I did not want to sell some of them. They are simply a part of me.

How much opportunity are you given by the Near East to be in constant contact with the sand/source?

I often make jokes about coming from the tribe Benu Thaaleba (tribe of foxes) which really existed in Arabia. I have to test my DNA, there must be some Arab genes. So, I have always been in contact with the desert (laughs). Although I was born far from every desert, by the wally of the river Lim at the south-east of Serbia, I have always had my dream which I live right now. I have always liked something different which was far away and, at the time, not approachable. But when we want something in our hearts, then we live as lead by angels. Now, almost 7 years of life at the Arab Gulf gave me the sand at a silver platter. I like to go to the desert, firstly I experience it, smell it, feel it, then I remember the old Arab poetry. Every grain has its own story, told and passed on for thousands of years, and then the inspiration rushes and I give myself to the canvas. Desert sand is special, different, colorful, suitable for work. I became an expert is types and colors of sand from country to country. From the white and small one at the coast of the Mediterranean to the red and small Libyan, dark gray rocky sand of Mecca and its surroundings, yellowish and brownish sand in Emirates or dark beige sand in Qatar. 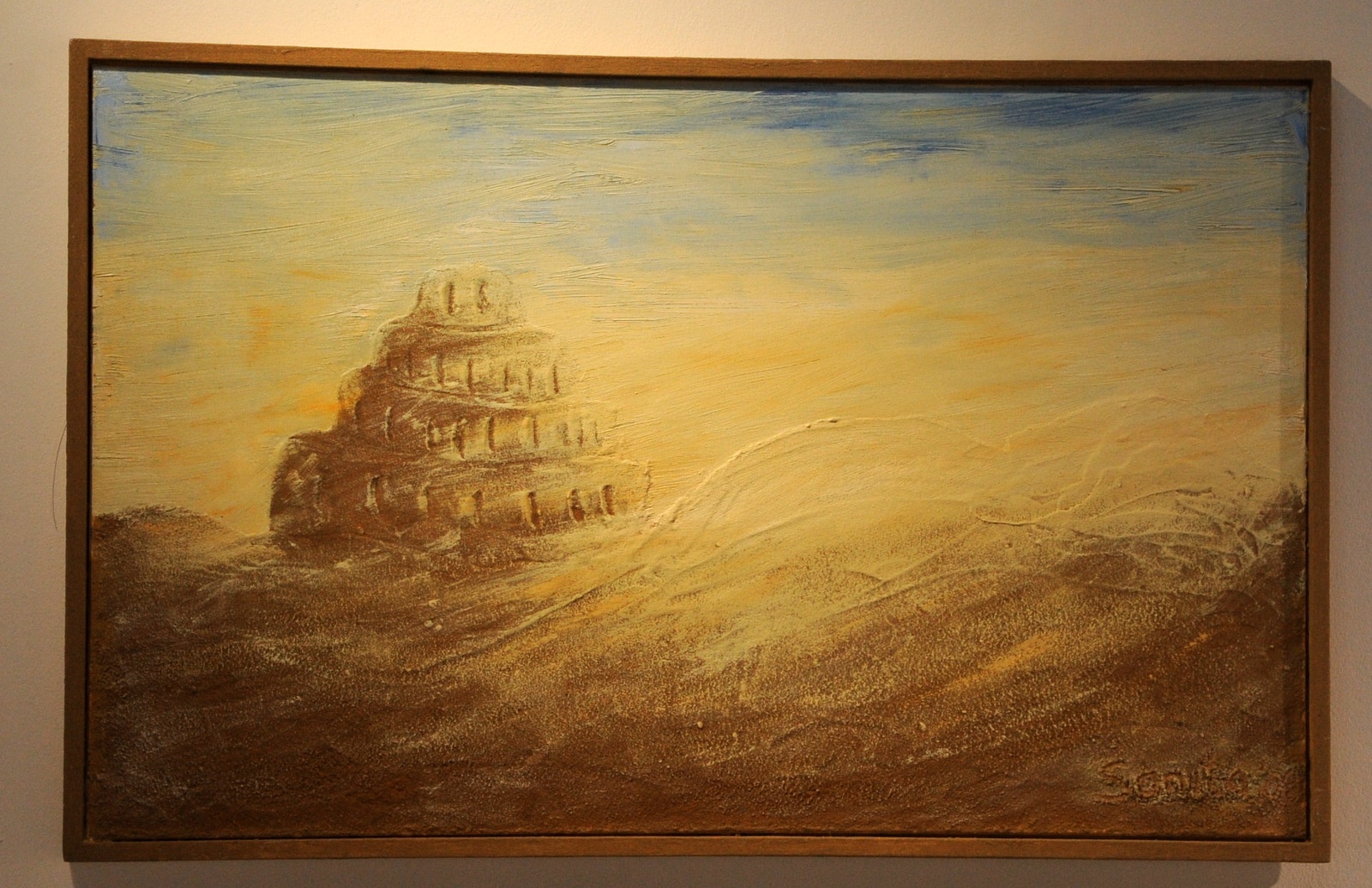 Were the paintings you painted them in Sarajevo different from the ones from the Arab Gulf?

Yes, they are different. The motifs and the experience are different. As I said, after you experience the desert, the inspiration flows to you by itself. I like to visit villages in Qatar and the Gulf in general, talk with the local people who do not speak English and then I hear beautiful stories about their lives and customs, enjoy their traditional socializing and long sitting, arab coffee, date palms, and all this gives me a new dimension of inspiration which I transfer to the canvas.

You are a deputy ambassador for BiH in Qatar and you have contact with diplomats. What is their reaction to your art, considering that you also had independant exhibits?

Diplomacy and art somehow go together. In the core of both are representation, passing a message, it is a nice connection. The synthesis of the diplomacy and art, as the Minister of Culture of Qatar said at the opening of my last exhibit in Doha, in December 2014. In fact, it is commendable when you get out from a shell and cliche of serious diplomacy and you represent yourself and your country in a different way. The reactions are very positive. Due to the uniqueness of my works, it was a special honor for me to exhibit them at the Emirates Palace, the so called Golden Palace in Abu Dhabi, under the patronage of the Ministry of High Education of UAE at the time, and all my other exhibits were under the patronage of ministers or municipalities. Once, on a call from the municipality West Region in UAE, I exhibited my works at a camel festival held in the middle of the desert, which was a very specific experience. 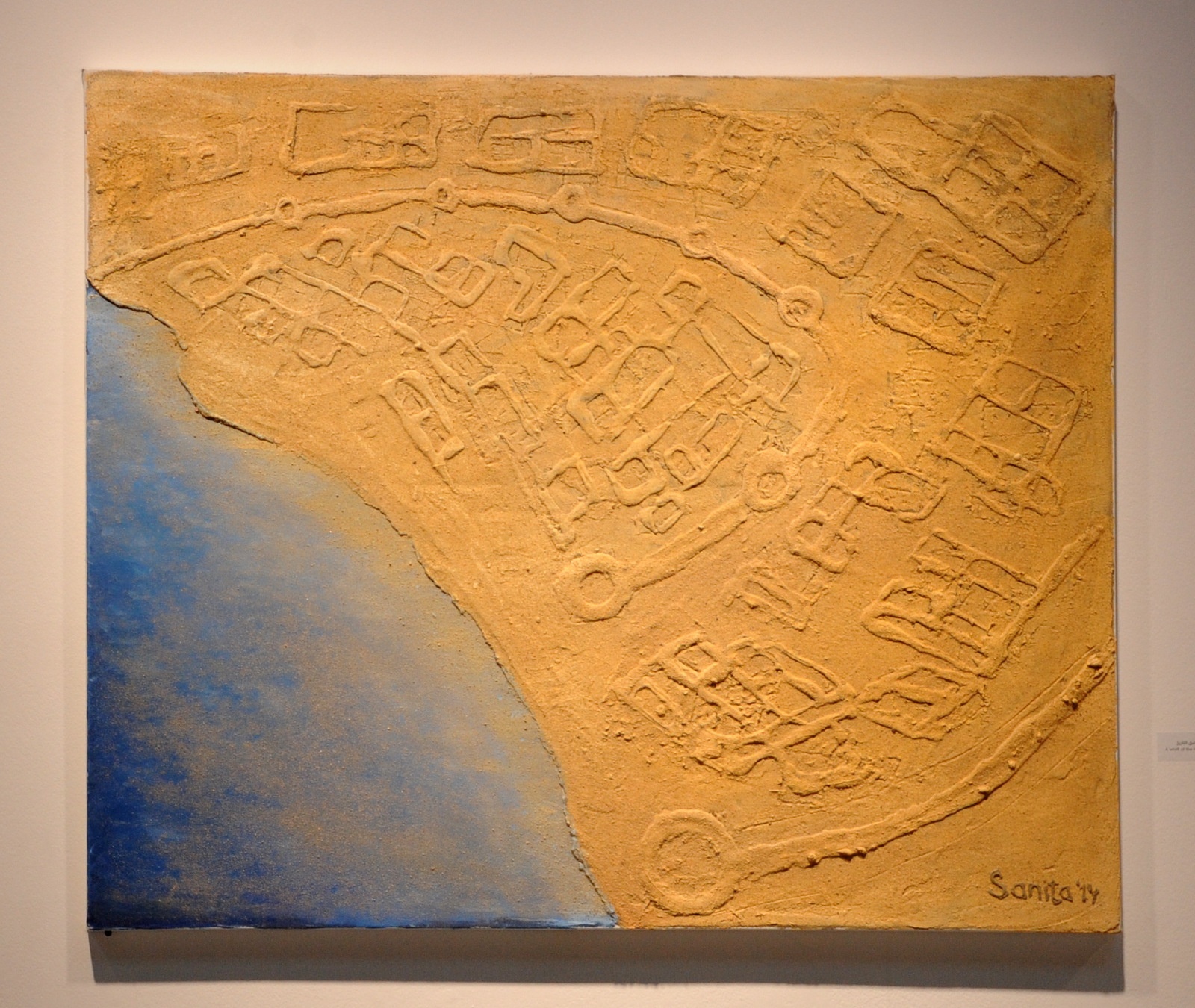